Roadmap to augment financial resources for R&D discussed at the Centre-State Science Conclave on 11th September, 2022 Roadmap to augment financial resources for R&D discussed at the Centre-State Science Conclave on 11th September, 2022

He stressed on funding support for knowledge creation, dissemination and application and highlighted the role of structures, co-location of industry and academia, as well as incentives like tax breaks. “At least 1% of CSR from the industry should be spent on solving present problems like drinking water, cancer, anti-microbial resistance and also on open-ended future problems.

Dr. Akhilesh Gupta, Senior Adviser, Department of Science and Technology (DST), emphasised on incentives like restoration of R&D tax deduction, philanthropic funding, and creation of an environment for FDI to encourage private investment in research.

He highlighted the need for innovation in MSMEs, increasing the scope of models like Biotechnology Industry Research Assistance Council (BIRAC), Technology Development Board (TDB), cluster model involving co-location of industry and academia, as well as steps like bringing back industry products funded by government to the government to promote the involvement of private sector in research.

He pointed out that with 100% FDI permitted in research, some states like Karnataka have aggressively attracted FDI in R&D, and other states can emulate such examples. 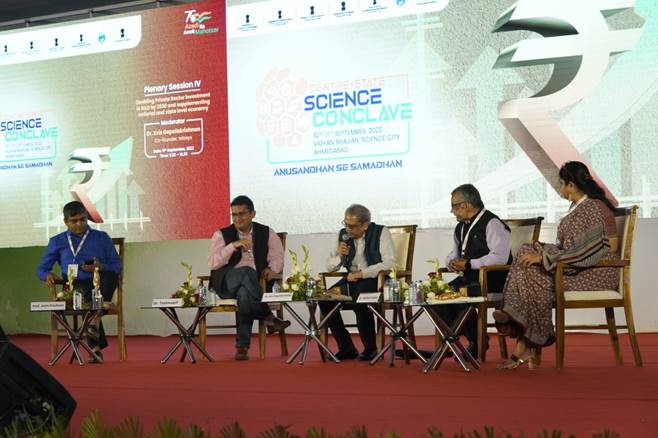 He underlined the necessity for mid-stage funding for start-ups and collaborations with Venture Capitals (VC) and industry. “Models, where VCs & industry can partner with government including state governments to take early fruition to scale, should be incentivised,” he added.

“With health becoming more and more important globally along with agriculture and climate, the importance of biotech sector is rising, and an early stage funding for deep science and deep tech could help use this opportunity,” he pointed out.

“Science should be posited as a service provider to all departments – an interphase connecting the dots, and policymakers need to be exposed to what science entails. Tier 2 industries that require government hand holding need to be identified,” she added.

Prof Amit Prashant, Director, IIT Gandhinagar, emphasised on strengthening the bridge between research organisations and the industry through collaborations with for translational research.

The panel of the conclave organised by the Department of Science & Technology, Government of India, jointly with the Government of Gujarat at Science City, Ahmedabad, served as a platform for exchanging ideas on funding mechanisms to strengthen investment in R&D.